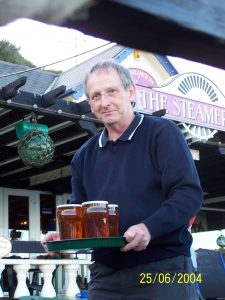 This page is dedicated to the memory of Mr Ewart Nightingale, our esteemed greatly
missed LSV Director, who sadly passed away in February 2010. As one member stated, he was the “G” in the FGCC.

LSV Directorate
1. Preparing the path.Our esteemed LSV Director would go to great lengths to prepare the paths that gentlemen of the FGCC will take. Organising
Sustrans to undertake appropriate projects, advising local authorities on how to make

the best use of their resources, transportation of baggage, proper labelling to avoid problems that most travellers experience, checking out the fare on

offer from local publicans, the long arm of the LSV Directorate knows no bounds.
And there is nothing like being welcomed with a fine pint of ale after a long ride! 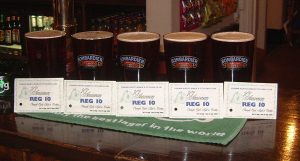 Reg 10 line up by the LSV Director

Our LSV directorate was responsible for the creation of many luggage labels that are regarded as works of art that are in much demand – beware Christies of possible fakes as these highly values items would never be offered for sale by gentlemen of the FGCC. To see an example of a collection of these prized labels:- 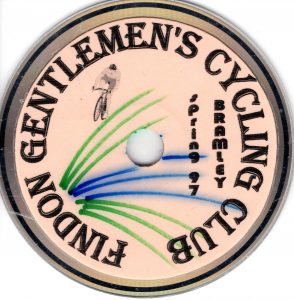 …and then there was the Bramley beer mat.

As all gentlemen know there is nothing to beat the character, entertainment and welcome that can be found at the better B&B’s in our fine country. Over the years the LSV Directorate with the assistance of FGCC members has determined a list of recommended B&B’s in the regions of the South Downs and the Isle of Wight. What discerning B&B owner needs a star rating when they can aspire to the Llama ratings of the FGCC, a five Llama rating being the highest rating that a host can achieve.

4. Resources.
And then there’s Bunces.