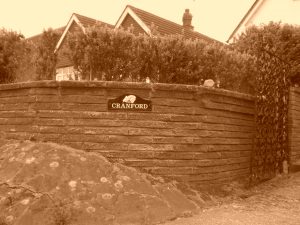 Location of the original TM bunker

Just cycled past CRANFORD and our very very very worst fears have been realised. The ex-Frimley Green incomer who has moved there has constructed an inlet and surrounding wall to the property but in doing so he has clearly REMOVED THE AIR RAID SHELTER!!!!!The Cranford Chronicles demand ACTION NOW:

Paul: Make your way to the High Courts now. Legal jurisprudence must be applied to bring the full weight of law to bear. If you need any help get Nick Way involved.

Zach: Arrange candle-lit all night vigils. Note that they waited until the watchful eye of the Stibbs’ was removed before they made their move. Stir your former parishioners into action. Please have the book of remembrance situated in a prominent place.

Mark: Arrange intercepts for all incoming and outgoing voice and data traffic. We need to know the enemy’s next move

Zach: Have Daniel pop round there with a few of his colleagues, straight jacket anything that moves and have the lot of them committed to the loony bin.

Francis: Be on stand-by to help Daniel, we may need drugs!

Richard: make your way there now. The sooner you get the FGCC colours daubed on this new wall the better the place will look.

Kim: Be on permanent alert to deal with the media. A sensational story like this is bound to be picked up by the nationals. However if Natasha Kaplinsky comes to town I will take over press liaison.

Ewart: We may need back up – Have your colleagues at the OPC ready to assist.

Andy: Once we have secured the beach head we will need a temporary building put on site whilst the original structure is restored. I’m afraid that means you giving up the shed, but hey, what better cause than in the
service of the FGCC!

I can’t help feeling that this crisis in our affairs could have been averted if only I could have persuaded Paul back into Redfearns.

For those not aware of the reason for this shrine: it was the workshop in which:

+ Influence was given to other great artists of the time such as Tom Townsend who, inspired by the early outputs from this fine centre of excellence, went on to produce such masterpieces as the wooden map holder

+ Most stirring of all, it was the workshop in which the first round of Gentlemen’s medals were created.

Other members are invited to pay tribute to this fine historical landmark. A book of remembrance will be situated on site.

See you all Friday. Paul, if I am not at home when you call then pick me up from outside Cranford. Bring along bolt cutters to cut through the chain that will be linking me with the railings.