An article in the January 1995 edition of the Findon St John the Baptist’s church magazine provides a summary of the origins of the Findon Gentlemen’s Cycling Club. Copy of the page itself is here and the full text can be seen below: 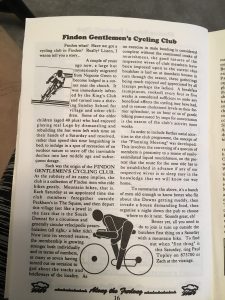 Origins of the FGCC – Findon News

Findon what? Have we got a cycling club in Findon? Really? Listen, I wanna tell you a story…

A couple of years ago now, a large hut mysteriously migrated from Nepcote Green to become lodged in a corner near the church. It was immediately infested by the King’s Club and turned into a thriving Sunday School for village and other children. Some of the older children (aged 40 plus) who had enjoyed playing real Lego by dismantling and rebuilding the hut were left with time on their hands of a Saturday and resolved, rather than spend this time languishing in bed, to indulge in a spot of recreation of an outdoor nature to stave off the inevitable decline into late middle age and subsequent dotage.

Such was the origin of the FINDON GENTLEMEN’S CYCLING CLUB. As the subtlety of its name implies, the club is a collection of Findon men who ride bikes gently. Mountain bikes, that is. Each Saturday at an appointed time the club members foregather outside Peckham’s in The Square, and then depart this village (set like a jewel in the tiara that is the South Downs) for a circuitous and generally circular velocipedic perambulation (alright a bike ride).

Now into its second season, the membership is growing stronger both individually and in terms of numbers, as many as seven having turned out on occasion to gad about the tracks and bridleways of the locality. As no exercise in male bonding is considered complete without the communal intake of nourishment, the good natures of the respective wives of club members have been imposed upon to the extent that breakfast is laid on at members’ houses in turn through the season, these gatherings being much enjoyed and appreciated by all (except perhaps the ladies). A breakfast (sumptuous, cooked) every four or five weeks is considered sufficient to undo any beneficial effects they may have had, and to restore cholesterol levels to their former splendour, so an hour or so of gently biking punctuated by stops for conversation is the extent of the club’s activity most weeks.

In order to include further social activities in the club programme, the concept of the “planning Meeting” was developed. This involved the convening of a quorum of members in proximity to a source of easily assimilated liquid nourishment, on the pretext that the route for the next ride has to be established in advance if any of our respective wives is to sleep easy in the knowledge that we will know our way home.

To summarise the above, it’s a bunch of men old enough to know better, who flit about the Downs getting muddy, then invade a house demanding food, then organise a night down the pub to choose where to do it next. Sounds great eh?

Better yet, all you need to do to join is turn up outside the butchers first thing on a Saturday with a mountain bike. To find out when first thing is this Saturday ring Paul Topley on 833700 or Zach at the Vicarage.” Note that both gentlemen have since moved and if you wish to join this august body please follow the contact details on this website.